This is a guest post written by Matt “Plant Power” Joiner. He is a member of the Marx-Bensdorf Cycling Team, and is the director of both the Rockabilly City Century and the Rockabilly Gran Prix.  An all around good guy who was vegan before being vegan was cool.

The young newcomer approaches the school parking lot slowly and with a healthy dose of apprehension. As he nears the area where the majority of the cars are congregated, he tries in vain to swallow the lump in his throat. This is not the first time he’s done this. Frequent relocations have meant that every time his family moves he has to suffer through this assimilation.

He knows the judgments that will come as the group goes over him with a fine tooth comb. They will look his lean body over from head to toe, checking for imperfections or any sign of weakness. “He’s really wearing those shoes?” one will ask. His attire must be current and perfect (or perfectly retro), and worn in just the right fashion. If he’s wearing a cap, it must also be set upon his head with just the right tilt to avoid their scowl.

Along with his appearance, they’ll question his strength, his knowledge, his ability. In a matter of seconds, judgments will be made about his attitude and his intentions, like a pack of wolves sniffing out an interloper, the alpha males wary of a possible challenger. He’ll have to play along with this ritual of acceptance; it’s his only hope to successfully move from the outside to the inner circle. 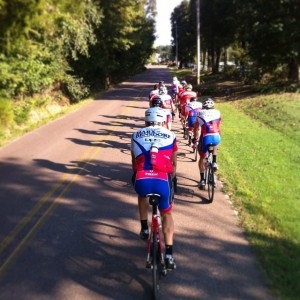 While this sounds like a scene from a high school melodrama, it actually is a situation that could play itself out at any group ride around the world.  Gaining entry into cadre of experienced road cyclists can make mob initiations feel like a stroll in the park. Okay, that’s a little too strong of an analogy, but the point is, there is little as intimidating as rolling up to a tight knit group of serious riders and hoping they will let you play in their reindeer games. As lame as that sounds it can be an unfortunate reality.

Truth is, though, that there is reason behind this madness. To be sure, some of it is our society’s typical rush to judgment and need to pigeon hole those we meet into our own preconceptions, but a large part of this initiation has to do with the safety of all those involved. While prejudices often do more harm than good, in this case they can save everyone from an outbreak of road rash and broken collarbones.

Few sports take place at such close quarters travelling over (often rough) roads at close to 30mph, so there is a huge amount of trust that must exist among everyone in the assemblage of cyclists on a typical group ride. For this trust to exist everyone in the group needs to know the strengths, weaknesses, riding styles, and habits of everyone else involved and the newcomer, while absolutely welcome, often needs to be vetted beforehand. Not to exclude, but to understand and be able to predict.

All of that said, the purpose of this article is not to justify the actions of those road cyclists that some might consider elitist, but instead to explain a bit of the reasoning for it. The aim is to give the new rider an idea of what to expect and how to ease themselves into a group ride. The reality is most new riders are not going to have to (or want to) jump in with a hard charging group of seasoned vets but the rules that follow should help everyone from the beginner to the experienced rider understand the group dynamics that take place on most rides.

Rule #1: Do your research – Know the intentions of the group you are going to ride with. Are they hardcore racers that average 22-25mph? Or casual riders who do more talking than hammering?  If you show up and you’re the only one out of 40 with hair on your legs, you might need to reevaluate. Find a group that fits your parameters and be honest with yourself about your ability. The harder rides will often be “every man for himself” while the slower rides often have a “no rider left behind” policy. Once you find a group and show up, don’t be afraid to ask for specifics. Is it an attacking ride? Are there sprints? Is there a point where everyone regroups? All of these will help. Also, if there is a set course, try to learn it beforehand.

Rule #2: Come prepared – Always bring a spare tube, a pump or a CO2, and all the tools to change a flat and make sure you know how to do it yourself.  Bring some money on the longer rides in case the group stops to fuel up. A cell phone is also good to have. Not all group rides stop when someone flats, so be prepared to ride home alone if it happens. 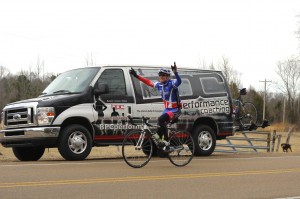 “First” across the non-existent sprint line

Rule #3: Pull your weight – Part of the allure of riding with a group is the higher speed attained by the aerodynamic advantage of drafting.  This advantage is dependent on different riders spending their time on the front of the pack pushing into the wind. If you are physically able, you should always do your fair share or you’ll quickly be labeled as a wheelsucker. Is the pack riding a paceline? Single or double? If you are not aware of the inner workings of the group sit towards the back and figure it out, but once you do, then it is time to participate. If you find yourself on a ride that is above your fitness level, let other riders know and hang on the back as long as you can. Do let the stronger riders back in line in front of you, though. No one will be upset with you, but don’t expect them to be happy if you sprint around them in the end.

Rule #4: Ride with your head – The pace and dynamics of a group ride can be constantly changing and it is important to have your head in the game and be able to adapt. The pack can be like a slinky, expanding and contracting with changes in speed and you have to constantly watch for changes and predict what might occur.  Relax and try to avoid fixating on the wheel in front of you. Instead, learn to look around and slightly in front of the rider that precedes you. This might be hard to do in a tightly spaced pack, but avoiding that pothole no one called out will be worth it. The more relaxed you are the quicker you can react.

Rule #5: Ride Steady – This is one that covers a lot of ground and is possibly the most important. You need to ride in a steady manner both in speed and direction (line). Your pace should be as predictable as possible, accelerating when it makes sense and slowing in a calm controlled action. Too many cyclists that are new to group riding make the same mistake- once they get to ride on the front, they feel like they must turn on the afterburners and accelerate with all they have. They stay there until the wear out and the pace just went from 23mph to 28mph and then down to 18mph before they stop. Do not do this! Keep an eye on your computer and notice the speed. When it is your turn in the lead maintain that speed and pull off before you have to slow down. This will keep the pace fast and steady and everyone will be happy.

As important is being predictable in your movements within the group. This is where some riders will feel the most intimidation as the seasoned guys will bark out “hold your line!” to those they feel might be a bit squirrely.  It is important to hold as straight a line as possible and never overlap your front wheel with the rear wheel of the rider in front of you!  Some time when you are alone, practice by following the white line on the side of the road. Don’t stare down at it but look ahead 20-30 yards at it.  You will be amazed at how closely you’ll stick to it.

Rule #6: Communicate – Communication within the group is of utmost importance. Always announce hazards as they come up. The riders behind you usually cannot see around you and rely on you to warn them. Listen to the other riders and pick up on their vernacular for road hazards and use it. “Car up (or back)”, “hole”, “gravel”, “stick”, etc. are all common announcements within the group. If there is an object in the road (say, a dead squirrel), call it out and point to it as you pass to alert those behind to look out for it. Keep an eye out for others in front of you pointing out hazards as well. You should also call out or signal for turns (point left for a left turn and right for a right- ignore that old method of holding your left arm at a right angle for a right turn- no one will know what you are doing) and for slowing and stopping.

Rule #7: No Riding in Aerobars! – This might make the triathletes a bit grumpy, but under no circumstances should aerobars be used on a group ride. First of all, there is no need to be in an “aero” position if you are drafting anyway. Secondly, very few people have the quickness to go from being on aerobars to being able to brake effectively in a panic. Contrary to what some believe, your control over your bike, and the ability to ride in a straight line, is also diminished. If you only have a “tri” bike, simply ride on the bullhorns when with a group and save the aerobars for your solo rides. Want more proof??? Here it is at the 13 second mark…

Rule #8: Respect your elders – Every ride will have a few –the alpha males (or females)- the guys that have ridden more miles than you have driven. They may have raced in Europe as teenagers or have ridden with ex-pros. They may be jerks, but watch and learn from them. This is how the knowledge gets passed down.  Group rides often have a tribal feel and this is how the oral tradition is handed from cyclist to cyclist. They may be harsh when needed (remember- safety is the key goal here), but usually once they feel you out and you gain their trust they can provide a wealth of knowledge.

In truth, working your way into a group ride is really not as intimidating as it seems. Most cyclists are really nice people and eager to help their fellow riders and, as was pointed out earlier, new riders will be starting with a slower, more relaxed, and group. Just remember these rules as you progress through the groups and the rewards will be greater skill and strength and a sense of camaraderie not found elsewhere.